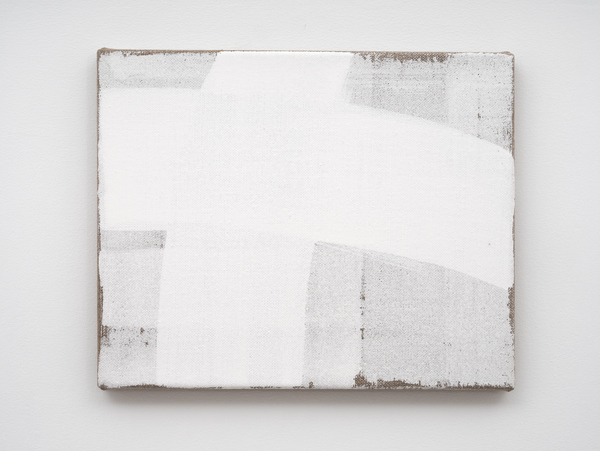 
This little canvas ‘Subdivision’ is an example for the category “Crossings” Crossings is the most recent addition to my visual vocabulary. This work came to live while priming canvasses with my home-made gesso, consisting of chalk, zinc-white and hide glue. An old recipe that Rembrandt and others already used in the 16th century to enhance the brilliance of the colours. The material has the powdery and luminous appearance of plasterwork. It is applied to the canvas while warm in a rather rapid pace to cover the canvas equally without cooling off too much. This is a systemized handling in which you move the brush crosswise in a chequered pattern. The beauty of the gradually disappearing woven structure and the grayish colour of the canvas is rather painterly already. I just celebrate this in ‘Subdivision’. The finishing touch comes as two brushstrokes in opaque white that enter and leave the canvas crosswise. They seem to be part of a greater movement that started somewhere far out of the canvas. The cross suggests a wide rounded space that could be read as the central fragment of the construction of a dome. I like to think of a roman church in Italy, the painting of the ceiling has not yet started, only the virgin white base is prepared. The three-dimensional illusion works as well in space as in the very depth of the painting. Still the small object is an anchor-point, which masters the forces effortless, as there is a compositional balance in the square field with the smallest of means. Everything is readable in an instant, no words needed.